It is with great sadness that we learnt of the death of Mr Galbraith in January. Mr Galbraith was one of the founding fathers of the school. He joined the first Headmaster, Mr Forster, as Deputy Head and together they led the school from its earliest days, establishing the ethos and starting what has become a QE2 family of former students, staff and friends in the community. When Mr Forster was seriously ill, Mr Galbraith took over as Acting Head and became the substantive Head on Mr Forster’s retirement in 1985. Harry was a larger than life character who cared passionately about the students and education. He fought for what was best for the School and established its reputation as a centre of academic excellence. He himself excelled in both sport and music and encouraged others to aim high in many different fields.

Mr Galbraith continued to live in Peel after his retirement in 1998 and was an active member of the community and continued to support the School. His legacy will be long-lasting and there are many people who remember him with admiration and gratitude. Our thoughts are with his family. 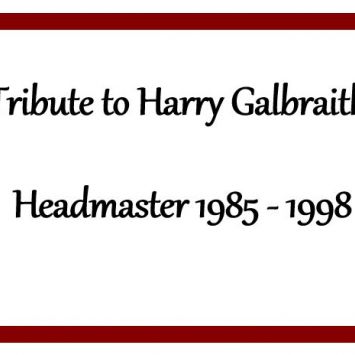